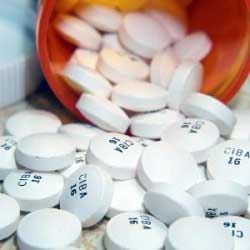 Tests for Amphetamines are available as either a single test or part of the multi-panel test which would include other drugs of abuse.

The drug tests above yield a positive result when Amphetamine metabolites in urine exceed 1,000 ng/mL. This is the suggested screening cut-off for positive specimens set by the Substance Abuse and Mental Health Services Administration (SAMHSA, USA).

Amphetamine is a Schedule II controlled substance available by prescription but is also available on the illicit market. Amphetamines are a class of potent sympathomimetic that in higher doses lead to enhanced stimulation of the central nervous system and induce euphoria, alertness, reduced appetite, and a sense of increased energy and power.

The effects of Amphetamines generally last 2-4 hours following use, and the drug has a half-life of 4-24 hours in the body. About 30% of amphetamines are excreted in the urine in unchanged form, with the remainder as hydroxylated and deaminated derivatives.

Ecstasy has a similar chemical structure to amphetamine with a high potential for abuse but a low physical addiction potential. Addiction potential is debatable. Withdrawal symptoms may include fatigue, loss of appetite, depression, etc.