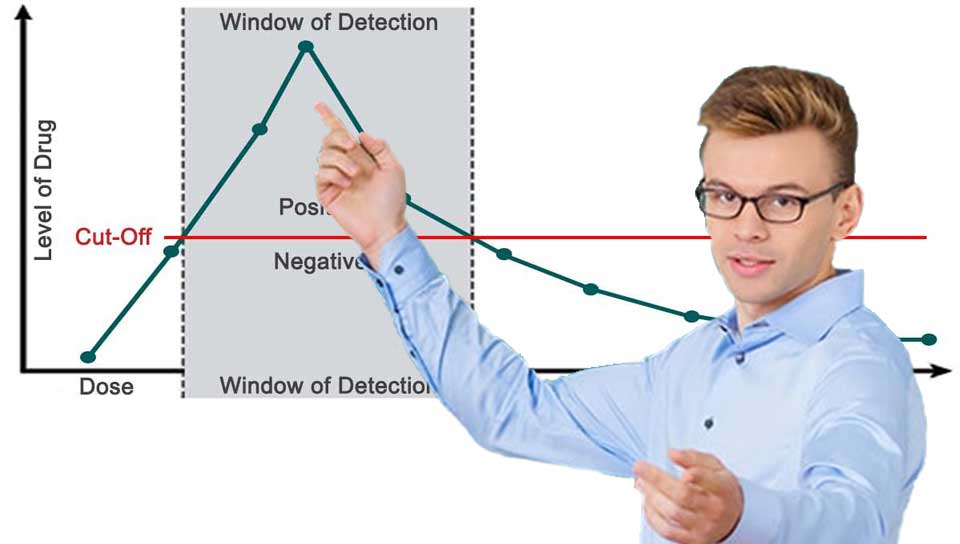 What’s the point of having a cut-off level?

When testing for drugs, there needs to be a control in place to establish a point when negative becomes positive. This is called the cut-off level. The manufacturer set this control or level from recommendations set by (NIDA), a US government department. It is important to note that a negative sample doesn’t mean that it is drug-free; it might contain a drug but with a concentration lower than the defined cut-off level.

What are the Cut-Off levels? – Why do we use them?

Drugs of Abuse Screening Tests are one-step lateral flow immunoassays intended for the detection of drugs in urine and oral fluids. These assays are used as a qualitative detection method and are overseen by the Food and Drug Administration (FDA).

The cut-off level is a point at which a test is either a presumed positive or negative. A positive result is when a drug detected is above that set level for that drug. For example, if cocaine was detected, the cut-off level will be at 300 ng/ml. The recommended levels vary for each drug and can be seen in more detail in the tables below. Urine and Oral/Saliva screening provide only preliminary results. Note: If a Presumed positive is detected, an alternative method must be used to obtain a confirmed analytical result.

The images above tell us the result of a drug screen under different scenarios. In Fig 1., the image shows the results are NEGATIVE as all lines/bars are visible. In Fig 2., this is a PRESUMED POSITIVE when no (T) line or bar is visible. This example applies to Cocaine and Opiates; The metabolite of Cocaine was detected at a level higher than 300 ng/mL, and the metabolite for Opiates over 2000 ng/mL. Anything higher than these levels is presumed positive. Confirm your presumed sample utilizing a technique called Gas Chromatography-Mass Spectrometry at a SAMHSA-approved lab. Fig 3. is the result of an INVALID analysis, generally due to insufficient sample volume.

Should I use a laboratory if the drug cut-off levels show the result is positive?

A laboratory should always be used to confirm a presumed positive urine sample. Whenever you get a presumed positive, it is impossible to know how much is in their system and if the rapid test worked correctly. A laboratory will test your sample and confirm your suspicions with Gas Chromatography-Mass Spectrometry (GC-MS); This is the preferred method for testing and will quantitate the amount found reported in ng/mL. Always use a SAMHSA-certified laboratory for testing.

GC/MS confirmation is unequivocal when looking for drugs and quantifies the target metabolite with a number. If a donor challenges the test result, a GC/MS confirmation from a certified laboratory will stand up in the court of law.

What are the detection times?

Detection times are estimates and apply only to urine screens. Many factors can determine how long a particular substance is detected in a person’s urine sample; these include their age, weight, sex, metabolic rate, the amount consumed, and over what time frame. No conclusions are drawn as to when a particular substance was absorbed or how much. Drug cut-off levels help determine if it is positive or not; if there is any doubt, we recommend a lab test to confirm that. You may obtain more specific information with the results from a confirmation test.

A full list of abused substances and detection times for urine and oral fluid can be found here.

What is a Medical Review Officer and why do we need them?

A medical review officer (MRO) is a physician that has been trained and certified to interpret and report test results. When a lab reports a specimen as negative, the MRO signs it off as negative.

The MRO is responsible for calling the person who had a positive urine sample reported and confirmed by the lab. The MRO must ask the donor if there is a reason why they were positive and ask if they have a doctor’s prescription to explain the result. In the case of marijuana or cocaine, there is virtually no justification except for the possibility of Marinol, which is a prescription drug containing marijuana, prescribed for post-chemotherapy nausea or possibly glaucoma.

If the drug cut-off levels show I’m positive, can I proclaim my innocence?

When a donor gets a positive test result for opioids after being confirmed by GC-MS testing, it may be because it contains hydrocodone, which is a prescription drug. If the donor can’t produce a prescription for this, then the MRO must report the result as positive for opioids. Conversely, if they can provide an order that satisfies the MRO, the test with be reported as negative.

An MRO also serves to redirect the donor’s specimen to a second certified laboratory if the donor challenges the laboratory result’s accuracy. The MRO must then look at the drug test results from the second laboratory and determine if they are consistent with the findings from the first laboratory,

DOT or Federal drug tests require that an MRO report all drug results positive or negative.

We conclude that drug cut-off levels are essential to determine if a donor is presumed positive or negative. They are used as the reference or marker for determining if the result of a test is over or under the legal limit as dictated by SAMHSA. Follow Us
Product Manager
SATISFACTION GUARANTEED. Our drug test kits are backed with a 100% satisfaction guarantee or your money back. Our products are FDA cleared, tested and used by organizations throughout the United States. We know how important the accuracy of a drug test is and that's why we are committed to supplying only the most reliable, highest quality products available. Delivering you accurate results and peace of mind.

Follow Us
Latest posts by Product Manager (see all)